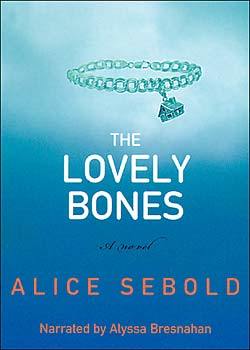 "My name was Salmon, like the fish; first name, Susie.
I was fourteen when I was murdered on December 6, 1973."
Advertisement:

The Lovely Bones is a highly acclaimed, best-selling 2002 novel by Alice Sebold. Its heroine is Susie Salmon, who posthumously narrates the story of her family after her own rape and murder in December 1973. While she watches from her own private heaven, grief throws her family into disarray, and when the police investigation yields no clues, Susie's father and sister take matters into their own hands when clues lead them toward the actual murderer.

The book was adapted to film by Peter Jackson and released in 2009. It stars Saoirse Ronan, Mark Wahlberg, Rachel Weisz, Stanley Tucci, and Susan Sarandon.

Tropes specifically about the book go here. For the film see The Lovely Bones.