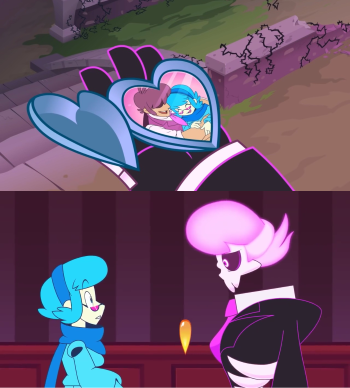 Star-Crossed Lovers are fated for woe, and one of the most heart-wrenching fates they can share is not to share a fate. When a Love Interest dies, the survivor is left to languish in heartbreak and self pity. Moving on is difficult, and quite a few choose to never move on. And sometimes, that's the deceased.

Yep, after dying, this Love Interest comes back as a ghost, zombie, or other form of Undead. Of course, this can be less than ideal, due to (among other things) smell and, err... "technical difficulties" in physically expressing their love. And then there's always the chance they Came Back Wrong.

This can happen several ways. Maybe their love was so strong that they decide to skip reincarnation and come straight back from the afterlife. Another alternative is for someone else to do the resurrecting, be it a Necromantic lover or a Mad Scientist capable of an Emergency Transformation. They might not even come back as an undead, but a Brain in a Jar. For trope purposes, as long as that significant other used to be dead but now isn't, it counts.

Of course, this resurrection is by no means a 100% joyous event. If the surviving love interest moved on and got a new partner, or the resurrectee has a Horror Hunger, or no corporeal body, there will be a lot of angst and Horror. Though sometimes it gets Played for Laughs and Hilarity Ensues.

Related to Ghost Shipping. Compare Boy Meets Ghoul, where the girl is a monster before she meets her boyfriend. Related to Replacement Goldfish, in this case it's the goldfish zombie replacing itself. Not to be confused with Reincarnation Romance.