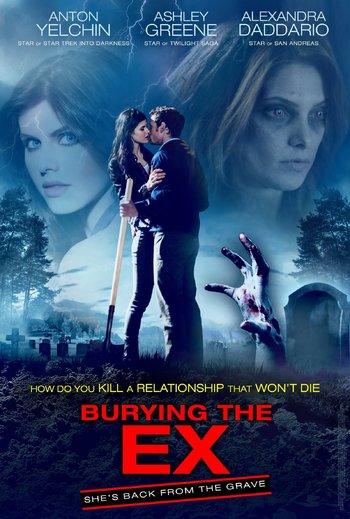 Burying the Ex is a 2015 horror/comedy film directed by Joe Dante and written by Alan Trezza. It was originally a short film made in 2008.

Max (Anton Yelchin) decides to ask his girlfriend, Evelyn (Ashley Greene), to move in with him, a decision he quickly regrets after Evelyn reveals herself to be a controlling shrew. Just as Max prepares to end their relationship at the urging of his half-brother Travis (Oliver Cooper), Evelyn is hit by a bus and dies. After a period of mourning, Max strikes up a relationship with Olivia (Alexandra Daddario), an ice cream shop owner whom Evelyn earlier insulted. Unfortunately, Evelyn comes Back from the Dead and returns to Max, who now finds himself torn between his girlfriend and his new love interest. Even worse, Evelyn threatens to turn him into one of the living dead so they'll be together forever.