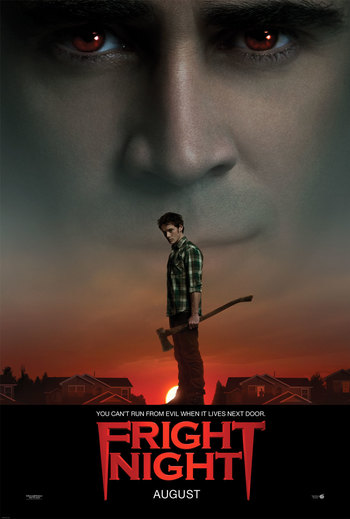 One bad neighbor can kill the whole block.
"You can't run from evil when it lives next door."
— Tagline
Advertisement:

Fright Night (2011) is a remake of the cult 1985 horror-comedy hit, directed by Craig Gillespie and starring Colin Farrell, Anton Yelchin, David Tennant, Toni Collette, Imogen Poots, and Christopher Mintz-Plasse. It drops the Peter Vincent Becoming the Mask story and turns Charley into a Buffy-type character, with Jerry resembling both Spike (suave and cool) and Angelus (loves to kill and psychologically torture his victims), and Peter as a Las Vegas showman instead of a former actor.

Despite under-performing at the box office, the film has turned out to be a critical success.

In late 2012, a direct-to-video sequel was announced under a different studio to be shot in Romania. It was later announced that the sequel, Fright Night 2: New Blood, would be a remake of the original film (and remake of the remake) with Charley, Amy, Peter, and "Evil" Ed coming back, with Jerry Gender Flipped as a woman named Gerri, played by Jaime Murray.

This was Disney's last theatrically released live-action horror film until Ready or Not (2019).