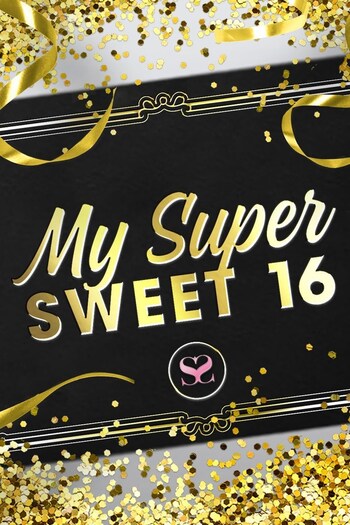 My Super Sweet 16 was an MTV reality show that ran from 2005-2008 about teenagers' sweet 16 birthday parties. Despite its name, it has also featured other coming-of-age birthdays such as the Quinceañera (turning 15 in Hispanic culture), 18, and 21 during MTV's annual Spring Break week. But rather than just a backyard barbecue or renting out a party hall with their families and friends, the kids featured in this show came from wealthy families, and their parties were an outlandishly decadent extravaganza, complete with high-profile musicians as performers, luxury sports cars as gifts, over a hundred of their peers turning out, and so on. Expect to see these kids cry, scream, swear, and berate their parents over every little detail about the party. Excerpts have been used in North Korean propaganda videos about the supposed decadence of the West.

The show aired during MTV's "Bling-Bling" era, where series like MTV Cribs (showing off the homes of young celebrities), Pimp My Ride (where beater cars are given rap-video makeovers), and various one-shot specials glamorized the lives of the wealthy, or at least their material excesses. However, the Great Recession of 2008 and the Occupy Movement of the early 2010's pretty much killed off interest in watching some teenage girl cry because she wanted to receive her sports car during her party and not the day before. In fact, My Super Sweet 16 is considered by many the point where MTV was oversaturated with these kinds of shows. As you can imagine, the series became prime parody bait, and even MTV got in on making fun of it. The first is My Super Psycho Sweet 16, a series of made-for-TV slasher movies in which expies of the kids are gleefully taken down by serial killers, and Exiled, another reality show in which the parents of former Sweet 16 stars, fed up with their kids' behavior, send them off overseas so that they can find out what it's really like to go without.

Tropes related to the show: