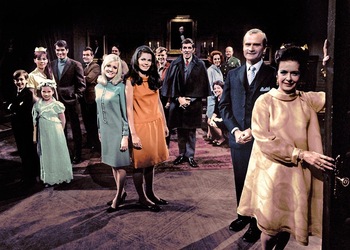 "My name is Victoria Winters. My journey is beginning. A journey that I hope will open the doors of life to me, and link my past with my future. A journey that will bring me to a strange and dark place. To the edge of the sea, high atop Widows' Hill. A house called Collinwood. A world I've never known, with people I've never met. People who tonight are still only shadows in my mind, but who will soon fill the days and nights of my tomorrows..."
—The opening narration of the very first episode.
Advertisement:

Dark Shadows was an American Soap Opera created by Dan Curtis, which ran on ABC from 1966 to 1971. While the series had Gothic themes from the very beginning, it was not until six months into the first season when it gained notoriety by introducing overtly supernatural elements.

The show was also notable for having storylines taking place in different time periods and parallel worlds, allowing the same actors to play identical relatives or lookalikes.

Dark Shadows has been an inspiration for numerous other supernatural series, including Kolchak: The Night Stalker, Twin Peaks, The X-Files and Buffy the Vampire Slayer. One plotline even involved a vampire who gives an extended interview about the supernatural to a hack writer.

Dark Shadows is one of the only soaps of the era to boast a nearly complete archive. All but one episode survives intact, most as the original color videotapes, with a handful as black-and-white kinescopes. (An audio track exists for the "missing" episode, which was mated with publicity stills for later commercial release and syndication.)

There was a short-lived television remake in The '90s, as well as a still ongoing Big Finish Audio Play series. A Tim Burton movie version came out in 2012, with Johnny Depp portraying Barnabas Collins.

We’re not really expected to care about the death of this young woman. We don’t see her take her last breath, and we don’t see anyone grieve for her. She’s a fallen woman, and once she falls, we’re done with her.