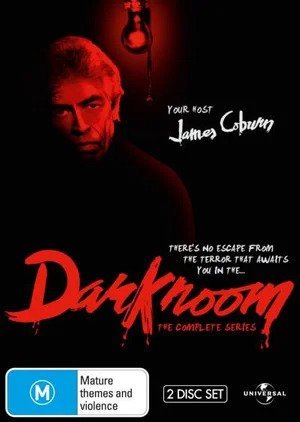 "You're in a house. Maybe your own... maybe one you've never seen before. You feel it. Something evil. You run, but there's no escape... nowhere to turn. You feel something beckoning you... drawing you into the terror that awaits you in the Darkroom!'"
—Opening Narration from the Title Sequence
Advertisement:

Darkroom is an horror anthology series that ran for 7 episodes in 1981 and 1982. Each episode had either two or three segments of varying length, all of which had a Twist Ending, and was hosted by James Coburn. It was notable for featuring numerous notable guest stars who were or would go on to be big names in both film and television, including David Carradine, Ronny Cox, Grant Goodeve and Helen Hunt.