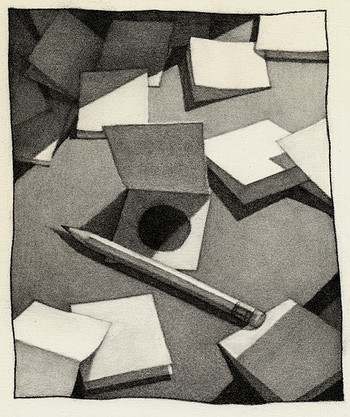 "The Lottery" is a short story written by Shirley Jackson, first published in The New Yorker in 1948 and later collected in her 1949 collection The Lottery and Other Stories.

It's June 27th. A small American village of roughly three hundred people has prepared for this day as if it were another celebration, like a square dance or a Halloween program. This event, the titular lottery, consists of selecting a family, then an individual, from the slips of paper concealed inside a splintery black box which has been used many times before. The winner (in this instance, a woman) is surprised to be selected and protests that she doesn't deserve the prize, but the whole community insists on giving it to her. After all, this is their annual tradition, and a good harvest is at stake. Cue the stones.

It would be any other quaint story if it weren't for the heavy symbolism. The story is Shirley Jackson's meditation on the pointlessness of violence and the inhumanity in the world, in each and every person and their own neighbors. Jackson received much hate mail for it, readers unsubscribed from The New Yorker in disgust, and the story was banned in the Union of South Africa (the precursor to modern-day South Africa). Jackson famously responded to this ban by saying that at least they understood the story.

It is probably best known today as a staple of American junior high/middle school literature classes. It has been adapted into many kinds of media, such as radio, one-act plays, short films

, a 1969 ballet, and a successful 1996 Made-for-TV Movie. Shout Outs in other media are not uncommon, such as The Simpsons and South Park as well as Squidbillies.

Not to be confused with the completely unrelated post-apocalyptic TV series The Lottery.

Tropes featured in the short story: