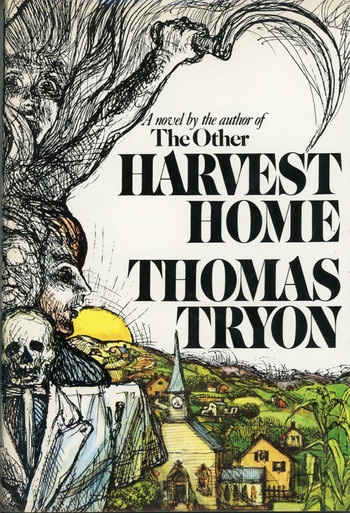 Harvest Home is a 1973 horror-suspense novel by Thomas Tryon, about a Town with a Dark Secret.

Ned Constantine, his wife Beth, and their teenage daughter Kate are slowly growing apart in their big-city life after Beth's tragic miscarriage and her subsequent aversion to sex leads Ned to infidelity. The tension between them aggravates Kate's psychosomatic asthma to life-threatening levels so that she can no longer participate in activities she once loved, which only makes things even more miserable for all of them. Their lives seem to be back on the upswing when an Unexpected Inheritance allows them to purchase a beautiful home in the quaint Connecticut village of Cornwall Coombe, a place where time seems to have stood still. In Cornwall Coombe, Kate's health mends and Beth's depression vanishes as they become more and more drawn into village life.

But Cornwall Coombe harbors strange secrets. Life revolves around seasonal rituals, starting with the crowning of a community "Harvest King" and culminating every seven years in the mysterious "Harvest Home." The village leader Widow Fortune is a warm, welcoming woman, beloved by all...yet her word is law, and she decides who gets to stay in the Coombe, who becomes an outcast, what parts of the Coombe are forbidden and—as Ned learns to his horror—who lives and who dies. Ned begins to suspect that as newcomers, his wife and daughter are in danger from upcoming Harvest Home...but he has no idea of the true horror that awaits in the ritual that "no man may see nor woman tell."

If the premise sounds a little familiar, one of the stranger bits of trivia behind Harvest Home was that it was written at the same time The Wicker Man was in production, and the two were released within months of one other, yet neither Tryon nor The Wicker Man director Robin Hardy were aware of one another.

Adapted into the 1978 Made-for-TV Movie The Dark Secret of Harvest Home, with Bette Davis as the Widow Fortune.