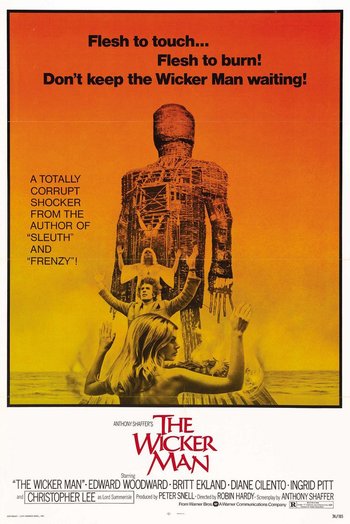 “Come. It is time to keep your appointment with the Wicker Man.”
Advertisement:

The Wicker Man is a seminal 1973 British Folk Horror film, directed by Robin Hardy, with a screenplay by Anthony Shaffer (inspired by the 1967 novel Ritual by David Pinner, but not officially an adaptation).

Sergeant Neil Howie (Edward Woodward), a devoutly Christian detective, travels to the remote Scottish island of Summerisle, home of a famous variety of apples, to investigate the disappearance of a young girl named Rowan Morrison. He is shocked to discover that the island has rejected Christianity in favor of old school Celtic paganism, complete with sexual rituals and a huge May Day festival, all proudly presided over by Lord Summerisle (Christopher Lee). Howie concludes that Rowan may be the intended victim of a Human Sacrifice, and races to rescue her. It turns out that he is on the right track, but the truth that awaits him is far beyond anything he might have suspected.

It is generally considered to be an influential Cult Classic within the horror film genre, specifically Folk Horror.

It was remade in 2006. In 2011, Hardy released The Wicker Tree, a companion piece of sorts based on his novel Cowboys for Christ, with Lee making a cameo as a different character.