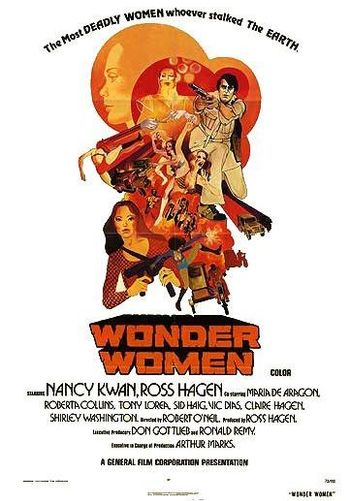 No, not that one
"This movie has nothing to do with the superhero Wonder Woman. It's just this weird crime caper with some sci-fi thrown in, shot in the Philippines for, like, a hundred dollars."
— Kevin Murphy managing expectations, RiffTrax
Advertisement:

Wonder Women is a 1973 American sci-fi action-crime horror exploitation film directed by Robert Vincent O'Neil (Angel (1984)), and produced by and stars Ross Hagen, a gravel-voiced tough guy known for appearing in such schlock as The Sidehackers and The Hellcats. Other notable cast members include Nancy Kwan as the villainess, Vic Diaz (“the Filipino Peter Lorre”) as a zany sidekick, Maria de Aragon (Greedo herself) as a henchwoman scorned, and Sid Haig.

for half a million dollars. Rather than pay the claim, the insurance brokers hire a detective named Mike Harber to search Manila for the missing athlete, and if possible bring him back alive.