A Fête Worse Than Death 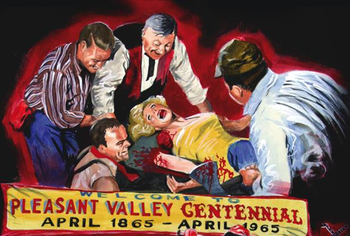 "A Rakdos party is a flop if anyone lives to talk about it."
— Slaughterhouse Bouncer

Even a Town with a Dark Secret likes a good party now and then. But being the kind of place it is, the town's big event probably wouldn't be the sort of thing you'd want to attend. Oh, yeah—face painting, parades, that's how it always starts. But then there's running and screaming. And you're the one doing both.

Perhaps you're first on the menu for the bake sale, maybe you're the winner of a Lottery of Doom, or maybe—and this one's popular—you're going to be sacrificed in a fertility ritual. Or all of them combined, with liberal arrangements of sequences. Either way, expect your impending horrible death to be offset by bunting, may poles, and dancing.

It's a common trope, of course, and with good reason; the idea of a bizarre town conspiracy that kills outsiders is creepy enough, but to have that turn into a big celebration that you can bring the kids to adds an extra level of twisted terror to the proceedings. It also provides a useful way to get all your creepy village extras in one big scene and emphasize that whatever is going on is happening with the full consent of everyone, except possibly the protagonist.

A variation on the trope is that the killings are performed by a minority and that the rest of the town is oblivious. This, too, has a twisted horror to it — the idea that families are participating in a horrible murder without realizing is very creepy.

Not to be confused with Fate Worse than Death, though the two can overlap. Or with Crappy Carnival.