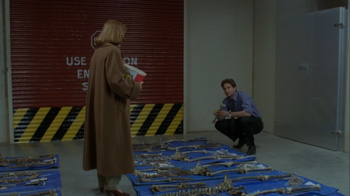 "Scully, I think the good people of Dudley have been eating more than just chicken."
Written by Frank Spotnitz
Directed by Rob Bowman
Chaco: She's one of us now, part of our town.
Jess: Unless we do something about her, there won't be any town left to speak of.
Chaco: No! No. Once we start turning on ourselves, we're no better than the animals.
Advertisement:

"As of this date, his remains still have not been found."