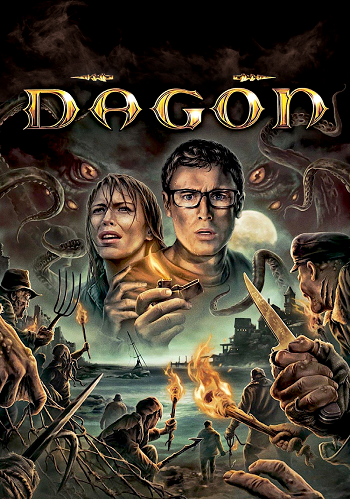 A young stock market tycoon, Paul, has been plagued by strange dreams of a green-eyed mermaid. His girlfriend, Barbara, feels it is most likely an indication of excessive stress and tries to convince Paul to go on vacation with her and their older friends, Howard and Viki, to the sunny shores of Spain. Paul, however, is reluctant to go citing work, though his girlfriend won't take no for an answer and the four of them set sail in a yacht for Italy.
Advertisement:

Everything goes fine at first. However, a sudden storm near a small fishing village named Imboca dashes the yacht against the rocks. A large rock has pierced the cabin below deck and Viki's leg is trapped between the rocks and the yacht. Luckily, the yacht is otherwise stable and in no risk of sinking. Howard stays behind to care for his injured wife while Paul and Barbara go ashore to look for help....

Dagon is a 2001 horror movie loosely based on the Cthulhu Mythos short story The Shadow Over Innsmouth by H. P. Lovecraft. The film moves the action from New England to the coast of Spain, in the town of "Imboca" (which means the same as "Innsmouth"). Dagon is a highly atmospheric horror film steeped in mist and eerie themes. Despite being a modern update, many of the themes remain the same. Even if much overlooked, Dagon is worth a watch for many horror and Lovecraft fans.

No relation to Mehrunes Dagon.

"We shall dive down through black abysses... and in that lair of the Deep Ones we shall dwell amidst wonder and glory forever."