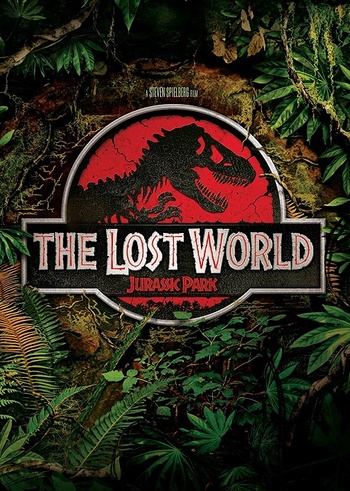 Something has survived.
"Oh, yeah. 'Oooh, ahhh,' that's how it always starts. But then later there's running and, um...screaming."
— Ian Malcolm
Advertisement:

The Lost World: Jurassic Park is the 1997 sequel to Jurassic Park and the second film in the eponymous movie franchise, directed like its predecessor by Steven Spielberg.

After the abandonment of Isla Nublar following the events of the first film, John Hammond (Richard Attenborough) invites Dr. Ian Malcolm (Jeff Goldblum) for a visit, and reveals that there is a second island with dinosaurs, which served as a breeding ground for the park. When Malcolm learns that Hammond has already mounted an expedition to explore the island and sent over Malcolm's palaeontologist girlfriend Sarah (Julianne Moore) in advance, he heads out to the island to retrieve her. There they discover that the InGen executives have launched their own expedition to bring back some of the dinosaurs to recoup their losses from the first venture. Things quickly take a downturn as both parties lose their communications and have to find a way to get off the island alive.

And it only gets worse when one of the dinosaurs is brought back to San Diego...

The film is loosely based on The Lost World by Michael Crichton, though it takes even less from its source material than the first film did. It also borrows some plot points (in addition to the title) to Arthur Conan Doyle's The Lost World.

Don't go into the long list of tropes in The Lost World: Jurassic Park!