Cave Behind the Falls 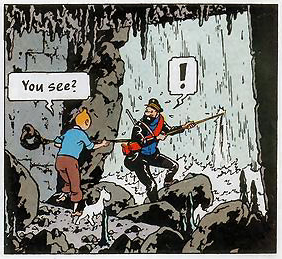 "Law of Ōkami: if there is a waterfall, there's a secret behind it."
— Chuggaaconroy
Advertisement:

Waterfalls aren't just pretty to look at, they're also great for hiding stuff. Who would ever think to look behind Niagara Falls to find the hidden treasure of King Whatshisname II? And who would suspect that the Big Bad would keep his reserve of Mooks in a cave where nobody would dare enter? The rush of water alone would keep any sane person away.

This is geological Truth in Television to a certain extent, as the churning water at the base of a waterfall erodes the rock behind it faster than the merely flowing water at the top. However, unlike their fictional counterparts, these caves tend to be shallow, flooded, incredibly wet and mossy, and thoroughly devoid of Inexplicable Treasure Chests.

Naturally, such a cave would be at the bottom of the Inevitable Waterfall. If you try going that route before entering the hidden cave, chances are you'd be dead before you hit the bottom. But remember, as the Grand List says, "There's always goodies behind the waterfall", so sometimes the risk is worth it.

Alternative Title(s): Cave Behind The Waterfall