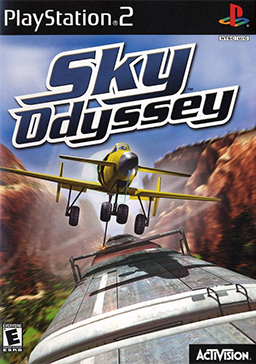 "For the young, and the young at heart... Comes an air-borne adventure like none other."
— Adventure Mode Introduction
Advertisement:

"Sky Odyssey" is a semi-realistic flight sim for the PlayStation 2. Developed by Cross and published by Activision it was released towards the launch of the PS2 in 2000. The game bills itself as an Action-Adventure flight simulation with a mix of hardcore strategy. The goal of the game is to navigate form the start of each level with a series of aircraft (both real world and fictional) and land at the end. Unfortunately for the player the game is set in a Death World where it seems every single thing out there is trying to kill you and destroy you aircraft. Windstorms, Hurricanes, Blizzards, earthquakes, rockslides, narrow canyons, caverns, and active volcanos all have to be carefully navigated through using your Improbable Piloting Skills to have any hopes of reaching your goal.

The story takes place across an archipelago of four islands within the fictional dark sea. These islands had remained remote and largely unexplored for centuries thanks to fierce storms, rough landscapes, and frequent geologic activity. However legends tell of the hidden Tower of Maximus, a grand city built by an ancient civilization thousands of years ago to protect the Garden of Eden.

The game starts off with the nameless pilot character, the latest in a line of explorers who have coveted the hidden tower and its secrets. To find Maximus this pilot must recover the four pieces of a lost map scattered across ruins on the islands the ancient civilization left behind. His journey will not be an easy one however as these ruins are located in the most dangerous parts of the islands, where even flying to them by air is considered a suicide mission.