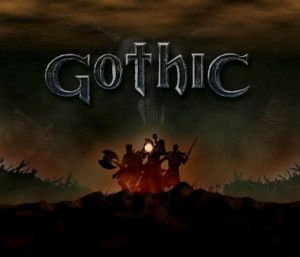 "Piranha Bytes apparently takes any concepts that are salvageable out of the trainwreck that is Ultima IX (figuratively speaking), patch it all up with what they carried over from their pen&paper passion, and somehow make a great game out of that. The new German RPG prodigy is called Gothic."
— Hardcore Gaming 101

A 2001 German game translated into English, Gothic is the first in a trilogy of Action RPGs starring The Nameless Hero, who has been thrown into a prison colony. We never find out exactly what crime he committed, and none of the other characters really care. At first, he's just trying to survive, and maybe escape if he's lucky - but he ends up having to save the world.

The sequel, Gothic II, once again follows the now free Nameless Hero, who is promptly recruited to defeat the approaching army of dragons. Sounds easy enough. It also had an Expansion Pack, Night of the Raven. Uniquely for an expansion, Night of the Raven makes large changes throughout the whole game instead of making them self contained to the new area. Raven, a minor NPC from the last game, attempts to obtain the Claw of Beliar. The Hero sets out to stop him, rediscovering an ancient, lost civilization in the process.

In the third game, Gothic III, the Nameless Hero travels to the mainland of Myrtana, only to find out that the land has mostly been conquered by the Orcs, though several factions are still struggling. Finding himself in the middle of a political struggle which also represents a war of dominance between gods, the Nameless Hero has to choose a side. Gothic III was the first game in the series to feature Multiple Endings, and was something of an Obvious Beta at release. An Expansion Pack called Forsaken Gods was also released, which took the Obvious Beta status Up to Eleven and wasn't made by Piranha Bytes. Most fans consider it So Bad, It's Good at best. This time, the Nameless Hero returns from exile because he is majorly pissed off at the people of Myrtana not enjoying the peace he has brought them with hard work, but rather warring each other in various factions once again. In the end, the Hero becomes the new King of Myrtana to unite them once and for all.

The fourth game in the series, Arcania: A Gothic Tale or simply Gothic 4 also not made by PB, stars a new hero who goes out on a Roaring Rampage of Revenge after the troops of the King (yeah, THAT King) butchered his village and killed his Satellite Love Interest. Of course, things are yet again not how they seem and the previous Hero didn't become an Evil Overlord just for fun... Arcania received low reviews and was poorly recived by fans for being decidedly un-Gothic in most ways, primarily being very linear. An add-on was completed, but Piranha Bytes's temporary sale of Gothic's rights only allowed JoWood to make two games, including expansion packs, and the obvious legal issues have prevented its release.

Meanwhile, Piranha Bytes made their own spiritual successor named Risen, which received good reviews and praise from journalists and fans. They later made another successor called ELEX.

with Piranha Bytes has confirmed they have regained the rights to the series due to their sale to JoWood being temporary. In 2019, a playable teaser of first game's remake was released by THQ Nordic, with the intention of receiving feedback from players. They later confirmed the full remake was going ahead after the teaser proved popular enough.

Gothic's main draw was its wide open world and the ability to 'choose' in the plot, although this really came down to just picking one of three camps for the first half of the game, as you are railroaded back into the central plot eventually. The world, however, is exactly as promised: within the limits of the magical barrier surrounding the colony (or the sea serpents/mountains in the 2nd game), exploration is rewarded with beautifully detailed scenery, complete with weather, and many hidden items.

Another notable draw of Gothic is the method of character advancement. Only hit points increase on their own at level up, while the player gains skill points as well. To spend these skill points the player must seek out trainers. Basic abilities like raising an attribute typically have free, easy to locate, trainers (at least for low levels), while trainers for more esoteric abilities (such as lock picking) may be limited to a small handful that require a quest to learn from and higher skill levels generally require faction specific trainers. The hero's skill is also a much greater effect on combat than just speed or damage; at low levels he is visibly inept at weapon use, being slow, predictable and frequently stumbling, while as skill increases, new abilities in combat are gained, movement is more fluid, and fumbles are lessened. Armor also matters a great deal and, with the exception of a few early pieces that are simply bought, is linked with quest progress. Gothic is based much more on character skill than most RPGs with real time combat, with a weak PC being unable to make any damage on a strong enemy.

Combat, additionally, utilizes a simple but effective Non-Lethal K.O. system which applies to both NPCs and the player, meaning there is a large and tangible difference between a tavern brawl or robbery on one hand and cold-blooded murder or a fight to the death on the other. The setting, quests, character interactions and crime system are all heavily influenced by this fact.

Besides the above, the series (particularly the first two games) has been praised for its general dedication to immersion in various ways, especially in terms of sound design, flora and fauna, and Artificial Atmospheric Actions, its rough, dark, cynical, and rogueish, yet still quite witty, playful, and highly quotable take on fantasy writing, and, arguably, being an early, very prototypical example of what would later come to be known as the Souls-like RPG formula. The Game Mod community, particularly in German, Polish, and Russian, also remains highly active even 20 years after release.

Not to be confused with the genre of Gothic Literature, the Goth lifestyle, medieval architecture, or the tribe of people from Gotland. Also notable for containing a character named Gorn, but no actual gorn.