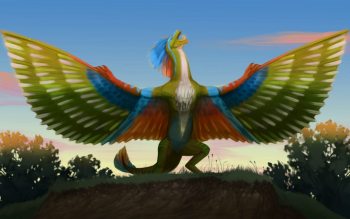 Embrace the wind.
"As one Sun sets, another rises. [You are] now but a spark, tiniest of flames. To survive, [you] must learn the great contradiction: to every virtue, there is an opposite which must be equally embraced."
—Darktooth
Advertisement:

Golden Treasure: The Great Green is a graphical Interactive Fiction game with RPG and Adventure Game elements created by indie developer Dreaming Door Studios. Set in a Science Fantasy version of Bronze Age Earth where dragons (called Draak-Kin) coexist with early human civilization, the player's role is to guide a newly hatched Draak from infancy to young adulthood — by surviving, exploring, learning, and living. The world hides many secrets, and time is limited. The young Spiritkeeper must overcome many challenges in order to determine the fate of Draak-Kin and Earth.

The gameplay is primarily controlled through selecting text-based options at the bottom of the screen or selecting points of interest. The player can decide to hunt for food, explore the unknown, deal with threats, and converse with numerous wild beasts, spirits, other Draak-Kin, and more through selecting text menu options or spots on a map. Scenes are illustrated by paintings, brought alive by parallax techniques and glimmers of spirit lines that all Draak-Kin see. There are some RPG elements in that the player's Draak-Kin grows stronger through mastery of the four Elements of Nature, and may accumulate treasure and artifacts. The Macrogame of collecting animal masteries and achievements provides permanent stat boosts across playthroughs, making difficult parts more feasible over time.

. A free demo is available that contains the full Prologue and Part 1.

May you be blessed.