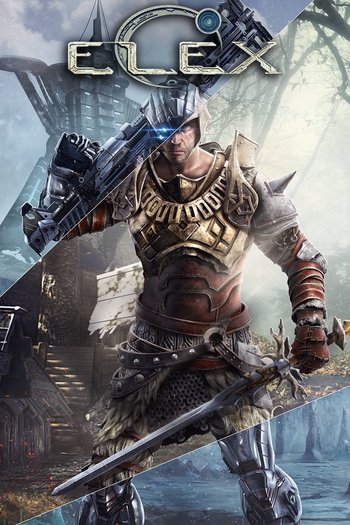 ELEX (Eclectic, Lavish, Exhilarating, Xenial) is a Science Fantasy third-person Action RPG developed by Piranha Bytes and published by THQ Nordic, released in October 2017 for the PC, PlayStation 4, and Xbox One. Taking place on the fictional world of Magalan, home to a Human civilization roughly equivalent to modern day Earth, after a meteor hit the planet causing the collapse of said civilization. And just to make matters more interesting the meteor brought with it the element Elex, a precious and limited resource which can power advanced machinery, give people magical powers and re-shape creatures into new and different life forms. Four factions are currently warring for control over Elex:

Described by some as Gothic meets Fallout, you play as Jax, an elite Alb commander who has been betrayed and kicked out of the organization. Hunted by his former organization, and the other factions more than willing to kill him if they find out his past, and dealing with emotions for the first time, the Alb renegade must forge new alliances to survive the wasteland.

A sequel was officially announced