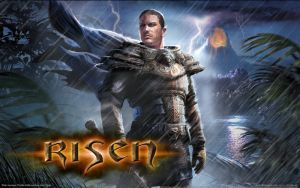 Developed by German developer Piranha Bytes, Risen is a third-person Western RPG released in 2009. It is very similar to the games of the Gothic series made by the developers before they left their former publisher and lost the rights to the franchises name. One of its signature elements is the combat system: You can parry weapons, dodge, and break the enemy's guard. The game is somewhat similar in nature to that of Oblivion, but instead of of using level scaling), every enemy is hand-placed by the developers, and leveling is accomplished by paying trainers to slowly raise your stats. This approach in execution makes leveling up feel more like a real accomplishment rather than flipping a flag that gives you instant mastery over all types of weapons, as is usual in this genre.
Advertisement:

The sequel, titled Risen 2: Dark Waters continues the story from the first game with the same protagonist. This time he tries to stop Titan Lords from awakening Titans who lay the world to waste. It takes place in a tropical setting (read:Welcome to the Caribbean, Mon!) and introduces several new elements, like firearms. Risen 3: Titan Lords was released in 2014, starring a new protagonist.