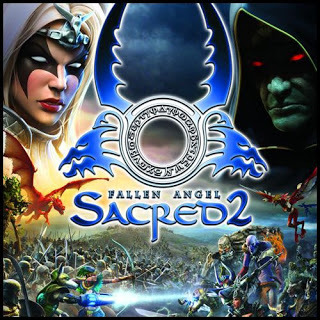 Pick your side.
Advertisement:

Sacred 2: Fallen Angel is a 2008 Hack and Slash Action RPG game, a loose Prequel to Sacred.

2000 years before the events of the first game, a very different Ancaria runs on a mysterious and volatile substance called T-Energy that is the source of all life and magic. Originally solely under the control of the ancient race of Seraphim, over time became the patrimony of the High Elves, who quickly became the dominant race of Ancaria thanks to its power.

Now the Inquisition, a High Elven Corrupt Church, seeks to gain control of Ancaria's T Energy, a mysterious substance that grants great power, but runs the risk of turning its users into mindless mutants. To this end, they have launched invasions into the neighboring nations as they search for the Great Machine, a mystical artifact that is said to be the source of all T-Energy, and will grant the one who controls it complete dominance over T Energy, and with it, all of Ancaria. However, not all are willing to let the Inquisition go unopposed, as a small but growing resistance movement has begun to form.

In the middle of this brewing conflict comes you, one of six character classes, each with their own backstory and motives. Your character now faces a choice: Will you walk the path of Light, and fight to stop the Inquisition's nefarious schemes and destroy the Great Machine, forever ridding Ancaria of its corrupting presence; or will you walk the path of Shadow, and strive to take the Great Machine's power for your own, slaughtering anyone who stands in your way?

An expansion, Ice and Blood, was released shortly afterwards. This expansion holds two new areas: the Crystal Plane, a region with deep Seraphim heritage where hunters go to test their worth, and the Blood Forest, where a lovers quarrel Gone Horribly Wrong has transformed the once vibrant forest into a dangerous, mutated land where demons and undead fight a neverending battle for supremacy.

Tragically, not long after Sacred 2 was released, developer Ascaron suddenly went bankrupt, causing the loss of the rights to export Ice and Blood to the US. Thankfully, German developer Deep Silver was able to acquire the IP, and has made both Ice and Blood and the international Gold Edition of Sacred 2 available for digital download. They also made Sacred 3, but we don't talk about that.