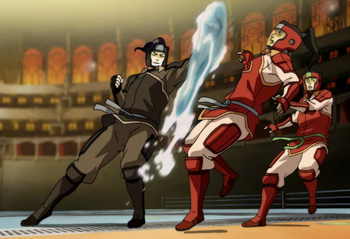 A punch not good enough? How about a water punch?
"Oh yes. Brown got the idea for his lightning combat glove when he learned of two bikers who had been mauled by a mountain lion. We can't help but be impressed by a guy whose instinctive reaction to such a story is: I must now punch that lion with thunder!"
— Cracked, "The Five Most Terrifying Sci Fi Upgrades to Deadly Weapons"

Some people fight with their fists; to them, there's nothing more gratifying than pummeling foes left and right. Other people prefer burning their target with fire; perhaps they just just love that smell of napalm in the morning.

But why not combine them?: After all, a punch hurts. Fire hurts. A punch on fire is bound to hurt twice as much as either of the two individually. And thus, the art of combining Elemental Powers with close-quarter combat was born.

The Elemental punch is a melee attack that has an elemental or energy-based upgrade. These come in quite a few flavors:

Of course, punches are not the only attacks that can be elementally empowered. Elemental kicks are almost as, if not just as, common. Channeling elements into weapons happens quite a bit, if the Flaming Sword and Laser Blade are any indication. And, of course, there's nothing quite like pummeling the enemy with a flying, full-body tackle whilst encased in one's element of choice.

This is a tactic that comes naturally to the Magic Knight and the Supernatural Martial Artist, and, understandably, usually requires Full-Contact Magic. In Video Games, this trope is often employed to prevent non-magical fighters from being excluded from Elemental Rock–Paper–Scissors. This may be seen as a Yin-Yang Bomb, combining matter with energy. Compare the Trick Arrow, the archer's answer to the Elemental punch. See also Swiss Army Appendage, Blasting Time, Item Amplifier and Power Fist.