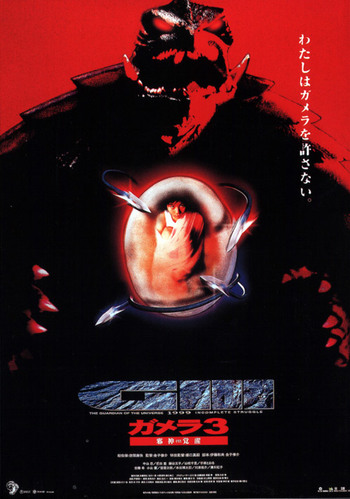 "Gamera will continue to fight...even if he's alone."
"He's not alone."
"...Gamera."
~Nagamine, Asagi, and Ayana, respectively, as Gamera walks out into the flaming ruins of Kyoto to face the impending Gyaos swarm.

Gamera 3: Awakening of Irys, also known as Gamera 3: The Revenge of Iris, is the 1999 sequel to Gamera 2: Advent of Legion and the final installment in the Heisei trilogy. It is directed by Shusuke Kaneko, with the screenplay by Kaneko and Kazunori Ito. The film was released on March 3, 1999.

In 1995, the battle between Gamera and Gyaos left much of Tokyo destroyed, but buildings were not the only casualties in the city. A young girl named Ayana Hirasaka, recovering from an appendectomy, could only watch in horror from her family's van as her house, and her parents and pet cat within, were crushed by Gamera.

In 1997, Gamera fought the Legion, but in order to defeat the Legion, he had to take drastic measures, which broke his connection to Humanity.

Now, in 1999, under the sea, a graveyard of Gamera skeletons has been discovered. Coinciding with this, reports have been surfacing all over the world that tell of flying, man-eating bird-like creatures. The Gyaos have returned, and their attacks are being tracked by Professor Nagamine. By this time, Ayana, who is living in a village in the mountains, has grown into a bitter young woman, and she often thinks about revenge. Ayana learns of a local legend that says a mythical creature, corresponding to the Red Bird of the South in Chinese lore, is imprisoned in a small cave shrine near the town, and that this being is the sworn enemy of the Black Tortoise of the North. She fixates on the idea that this could be the instrument of her revenge on Gamera, and finding the shrine, moves the ancient protective stone that seals it in place. When she returns she finds an egg of sorts in the cave, along with a glowing stone bead, reminiscent of the one that Asagi used to have. She takes the bead, and when a tentacled creature hatches from the egg, she quickly becomes friends with it, naming it after her deceased cat, Irys. Ayana decides to raise Irys to kill Gamera and avenge her parents.

Later that same night, Gamera fights two Gyaos over the Shibuya district of Tokyo, setting the city ablaze and killing hundreds, if not thousands, of innocent people in the process. Seeing this on a news report, Ayana's hatred for Gamera only grows stronger. The JSDF has also put Gamera back onto their enemy list, and are actively hunting him. Meanwhile, Nagamine has made contact with Asagi Kusanagi and her old friend Osako. Asagi reveals to Nagamine her fear that Gamera's ties with her were severed when the bead was destroyed in 1996. Recently receiving a video game, as well as an address of its developer, Nagamine investigates a man named Shinya Kurata, and his partner Mito Asakura, both of whom are involved in some kind of conspiracy.

With the reluctant help of her neighbor Tatsunari Moribe, whose family is the hereditary guardian of the cave shrine, Ayana raises Irys in secret until it decides to "bond" with her. After Moribe rescues Ayana, Irys goes on a killing spree, sucking the fluids out of almost everyone in the village, save Tatsunari, who managed to hide from the creature. After investigating the village, Nagamine and Osako find Tatsunari and attempt to rescue Ayana, who has been kidnapped from the hospital by Asakura and Kurata. Osako stays with Tatsunari, trying to convince him to rescue Ayana as well. Tatsunari eventually agrees and the pair head off to find Ayana. Meanwhile, Irys has grown since its village massacre, and is now almost as tall as Gamera, if not taller. The JSDF is sent in to deal with the monster, but it quickly defeats them and soon goes off in search of Ayana, who is now in Kyoto. Moribe's grandmother explains his duties as shrine guardian (which he uncomfortably realizes he has bungled badly) and tells him to always carry with him an ancient artifact, a dagger of flaked stone.

Flying towards Kyoto, which is being hit by a hurricane, Irys is intercepted by two jets, but before it can eliminate them, Gamera appears, dueling with Irys in midair until the military shoots him [Gamera] down. Irys soon makes landfall in Kyoto, and the city is unprepared for the monster. Making his way towards the train station where Ayana is, Irys leaves death and destruction in his wake, but he is soon intercepted again by Gamera. The two monsters soon turn Kyoto into a raging inferno as Irys manages to deflect Gamera's fireballs, forcing the turtle to resort to melee combat. Asagi and Nagamine try to break Ayana's bond with Irys in order to help Gamera, but it does not work. When Asakura takes Ayana's bead, she tries to take control of Irys, but this only gets her killed when Irys impales Gamera and sends him crashing into the station. Kurata is also killed after a large piece of debris falls onto him, while Nagamine is wounded.

Irys once again attempts to bond with Ayana, but Moribe steps in the way, throwing the ancient stone dagger at Irys. The dagger has no effect on Irys and the beast easily deflects it, but it makes a small cut on Ayana's cheek, bringing her out of her stupor. Realizing her situation, Ayana is helpless as Irys knocks Tatsunari out of the way and then absorbs her into his chest. Irys then forces Ayana to relive her memories of when her parents were killed, making her realize that their deaths were an accident when Gamera was fighting the Gyaos. Irys then forces Ayana to watch his memories of killing the villagers, including most of her family and Moribe's family, in a horrific act of cruelty. Just as Ayana begins to lose all hope, she is pulled out of Irys by none other than Gamera. Irys does not take kindly to this, and impales Gamera's right hand with one of his tentacles, which then begins to drain Gamera's fluids, which allows Irys to steal his powers and create fireballs of his own. Gamera, in a bold attempt to stop Irys, destroys his own arm and hand, before Irys releases the fireballs. Gamera absorbs the fire and creates an arm of flame that he uses to impale Irys, killing the monster and blowing it up.

Meanwhile, the JSDF has received a report that thousands of Gyaos are converging on Japan. The JSDF decides to switch from fighting Gamera to fighting Gyaos, as only with Gamera's help can they hope to survive. Back in Kyoto, Gamera hands Ayana over to Nagamine and Asagi, who try to revive her, but are unable to do so. Gamera then takes matters into his own hands and revives his former enemy. Moribe has survived, and Ayana tearfully apologizes for her part in Irys's rampage. Gamera departs and everyone watches as the Earth's guardian heads out into the flaming ruins of Koyoto, intent on fighting the Gyaos, even if the battle kills him.

The secondary title character Irys is not to be confused with the Project: HOPE idol of the same name.