"If the world truly is falling apart at the seams, then it's our job to put it back together."
~ Colonel Watarase 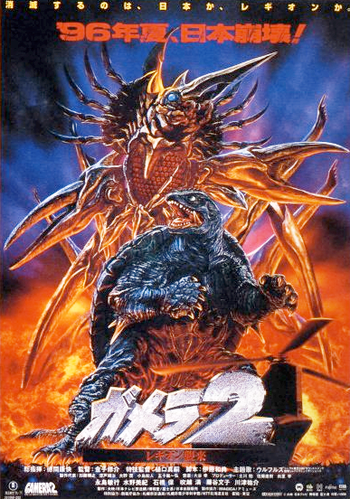 Gamera 2: Advent of Legion, also known as Gamera 2: Attack of Legion, is the 1996 sequel to Gamera: Guardian of the Universe and the second installment in the Heisei trilogy. It is directed by Shusuke Kaneko and written by Kazunori Ito.

A strange meteor shower strikes Hokkaido, Japan, in the first of several unusual occurances in Winter of 1996. Meanwhile, strange lights, much like aurora borealis, appear in the sky over the countryside, not too far from where the meteor shower hit. An investigation is headed by a scientist named Midori Honami (played by Miki Mizuno), and her colleague Obitsu (played by Mitsuru Fukikoshi). The next day, another investigation headed by JSDF colonel Watarase (played by Toshiyuki Nagashima), looks into these strange incidents and the impact crater of one of the meteors. The impact crater, despite its size, appears to be normal, however, one of the witnesses of this meteor noted something strange: the meteor was slowing down as it neared the ground. A beer factory soon experiences a break-in, but the culprits are nowhere to be found, except for the testimony of two scared security guards (including a job-switching Mr. Osako).

It isn't long before disaster strikes in Sapporo. A subway train is almost forced off of its rails, and soon the conductors and passengers are attacked by strange, man-sized, bug-like creatures. A police team is sent in to investigate and find survivors, but nearly all of the police are slaughtered by the strange beings. Soon, the entire area around the subway is cordoned off as the army is brought in, and they do find survivors. The big question on everyone's mind is: why were these passengers spared when everyone else was killed?

As the military tries to combat and understand these strange creatures, a large, plant-like structure bursts through the ground above the subway, destroying a building in the process. It is soon discovered that oxygen levels are rising to dangerous levels in the subway, especially near the location of the creatures and the plant. As Honami and Obitsu study these strange beings, they make a terrible discovery, alongside the JSDF: The plant is a seed pod, and it will soon depart, causing an explosion that will destroy nearly all of Sapporo. The JSDF prepares to destroy the pod before it can launch, but this proves ineffective. Fortunately, Gamera has appeared and he soon arrives in the city, destroying the seed pod before the strange aliens retaliate. As the space-bugs cover Gamera like ants on a sugar cube, two men on the ground, Colonel Watarase and Hanatani, make a biblical reference, with the aliens then being dubbed, "Legion."

Gamera soon retreats, and shortly afterward a gigantic Queen Legion emerges from the ground, flying away into the night. Fighter jets intercept the queen, but afterwards, there is no sign or trace of her to be found, other than her wings. Less than a day or so later, another Legion Flower emerges in Sendai, and this time it is much closer to launch than the previous one. Realizing that they cannot hope to stop it this time, the JSDF evacuates Sendai. At an airport, where civilians, including Asagi Kusanagi, are being loaded onto helicopters, Gamera soon appears again as he prepares to attack the Legion Flower. Before he can even land, however, Gamera is ambushed by the Queen Legion, who once again emerges from the ground and battles Gamera to a draw while he tries to protect the helicopters from her advance.

After successfully holding off the Legion Queen long enough for the helicopters to escape, Gamera is knocked aside by her as she burrows underground. Determined to stop the flower from launching, Gamera ignores the retreating queen and makes his way to the site of the alien plant. By the time he reaches it, however, it is too late. Although he prevents it from launching, it still ignites and causes an explosion, destroying Sendai and seemingly killing Gamera. With the Atlantean turtle apparently dead, The JSDF begin preparing to hunt down the Legion Queen and find her weakness. So far, the only major breakthrough is the discovery that the smaller Symbiotic Legion are attracted to electromagnetic sources.

The Legion Queen is sighted making her way towards Tokyo, one of the largest sources of electromagnetism anywhere on Earth, with the hopes of setting up another flower. Despite knowing how small their chances are, the JSDF set up defensive lines at the outskirts of the city, preparing for a final showdown with the Legion Queen. Meanwhile, back in the ruins of Sendai, Asagi, accompanied by Honami, uses her bead to help wake Gamera up. She soon succeeds in resurrecting Gamera, but the bead is destroyed, and Gamera loses his link with humanity in the process. Gamera, wanting revenge, seeks out the Legion Queen, who has already broken through the JSDF's first line of defense.

Now fighting against two foes, the Legion Queen begins using increasingly vicious attacks and abilities in an attempt to win. Working alongside Gamera, the JSDF succeed in damaging the Legion Queen, giving Gamera a fighting chance against her. The battle with the Legion Queen soon reaches its apparent end when Gamera manages to rip the Queen's horns off of her head, seemingly killing her. However, this only makes her angrier than ever before, and she starts using vicious melee attacks and sending out Symbiotic Legion, which the military counter by drawing them towards power lines. With the battle now reaching fever pitch, Gamera unleashes his ultimate weapon, the Mana Cannon. Gamera completely obliterates the Legion Queen. Gamera roars a salute of sorts to his human allies before flying into the sky. Humanity now realizes just how valuable an ally Gamera is, but the uneasy point is made: if Gamera's goal is the protection not of humanity, but of Earth itself, what will happen if Gamera ever decides we humans are the worst threat to Earth...?