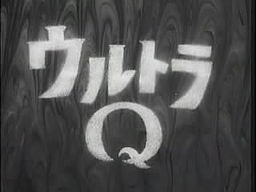 Stop us if you know about this one.
Advertisement:

Ultra Q (ウルトラQ or Urutora Kyū) is a tokusatsu SF/Kaiju series made in the tradition of Toho's many tokusatsu Sci-Fi Horror films.

Produced in black and white by Tokyo Broadcasting System/Tsuburaya Productions, Ultra Q is actually the first of the long-running Ultra Series, and was broadcast on Tokyo Broadcasting System from January 2 to July 3, 1966 (the final episode was preempted until December 14, 1967), with a total of 28 episodes. This series was followed a week later by the more well-known Ultraman (Urutoraman, 1966), the second Ultra Series.

Unlike most of the franchise it would spawn, it did not have a size-changing Henshin Hero. Instead, it was more of a mystery-of-the-week format that gets it compared to The Outer Limits (even with an intro reminiscent of it!) with, of course, giant monsters being the culprit a lot more often than it was in those series.

Two reimaginations of the series were released, Dark Fantasy and Neo Ultra Q. As well as a movie in 1990, Ultra Q The Movie: Legend of the Stars.