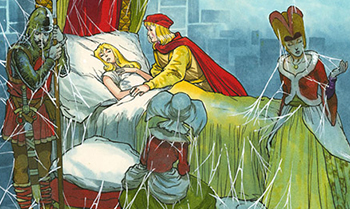 So once True Love's Kiss clears the cobwebs, help everyone upgrade their clothing.
Advertisement:

Someone is settling down for a nice nap. When he wakes up, it may take a while to realize it's several decades later. He sees the effects of his absence. Anything he did wrong can no longer be fixed. Those who loved him, if still alive, are miserable, and everything has changed. The Future Is Shocking trope may ensue.

A combination of Yet Another Christmas Carol and It's a Wonderful Plot sans Christmas elements, often with some 20 Minutes into the Future mixed in.

This is Older Than Feudalism. The story it's named after is an old American folktale, which itself is derived from an earlier Dutch folktale, having variants stretching back to the third century CE.

Compare the King in the Mountain and Human Popsicle. Compare Cold Sleep, Cold Future and Asleep for Days. See also Year Outside, Hour Inside, where the victim doesn't sleep away the years but spends them in an enchanted place. When the character is conscious during this it's The Slow Path. An extreme version of this trope is Slept Through the Apocalypse, where the world has ended while the protagonist slept. If you want to add humor when that person wakes up, use Rip Van Tinkle. When someone is deceived into believing this trope it's Faked Rip Van Winkle. Also compare the Heavy Sleeper.