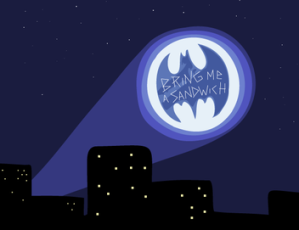 "Holy turkey on rye, Batman!"
"The comic is simply a commentary on the love life of sandwiches."
— From the comic bio

is an exploration of modern America, an in-depth looks at slacker culture, a smart examination of bachelor life, and a good source of info on fighting bears. The Dog House Diaries is a webcomic created by William Samari, Ray Yamartino, and Rafaan Anvari (referred to in the comic as Ray, Will, and Raf). The comic is a series of normally unrelated graphs or stickman comics that occasionally have the three authors as characters.

The comic which began in 2009 is notable for its laid back and down-to-earth sense of humor (This is a webcomic that never Crosses the Line Twice) and for its uniquely drawn characters (the stickmen have a distinct headshape). Though comics tend to have no noticeable continuity, running jokes include fights with bears, obsession with sandwiches, and a general lack of communication between genders. Though it has only a modest fanbase, the comic has had some success with comics that perfectly lampoon film tropes, modern social media like Facebook, and simply how twentysomething adults interact.

The comic updated on Mondays, Wednesdays, and Fridays and every comic includes three extra jokes in the form of a slogan placed under the comic title (sometimes fan contributed), an Alt Text, and a comic annotation that often self-deprecatingly tells what Will, Raf, and Ray are up to.

On June 22nd, 2015, it was announced that, due to all of the authors having children they needed to raise, the comic would be moving to an irregular posting schedule. The final strip, four comics later, was posted on August 13th, 2015, and the comic remained on hiatus until May 1st, 2017, when three new comics were posted, followed by a switch to a new text-based format. The description of Planetary Migration states that the comic's name will likely change in the future.