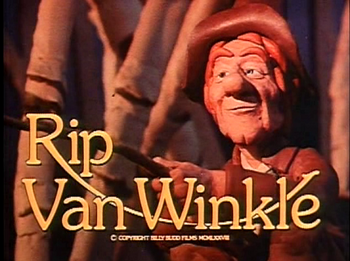 Rip Van Winkle is a 1978 animated short film (27 minutes) directed by Will Vinton.

It is of course an adaptation of the famous short story "Rip Van Winkle" by Washington Irving. Rip Van Winkle is an amiable bumbler living in the Catskill Mountains of New York in the 18th century. He is a delightful fellow given to singing and storytelling, beloved by the whole town, except his wife. She's sick and tired of the fact that Rip, although he's a super guy, is also very lazy and is way behind on the rent for their little farm.

Finally Rip goes out one day with his crop, intending to sell it and finally get his farm solvent. But through his own incompetence, almost all of his harvest falls out of the back of his wagon. With no food to sell and lacking a better idea, and dreading the thought of coming home, Rip goes off squirrel hunting in the forest. There he meets some strange men playing "nine pins" (a form of bowling). They offer Rip some of their moonshine, which he drinks. Rip passes out, and after a surreal dream, wakes up with a long grey beard and a musket ruined from rotting wood. He goes back into town and finds out everything has changed.