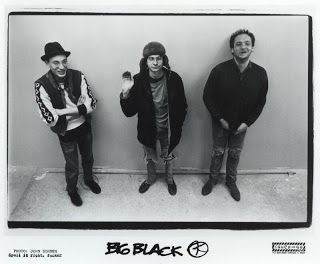 Post-Hardcore band formed by Steve Albini in 1981 and dissolved in 1987. Became popular within the underground music community for their distinctive "clanky" guitar playing, the use of drum machine instead of a drum kit (predating its use in Industrial Metal), and their dark and explicit lyrical content.

According to Steve Albini, their name is "just sort of a reduction of the concept of a large, scary, ominous figure. All the historical images of fear and all the things that kids are afraid of are all big and black, basically."

Not to be confused with Christopher "Big Black" Boykin from Rob & Big.