Video Game / The Legend of Zelda 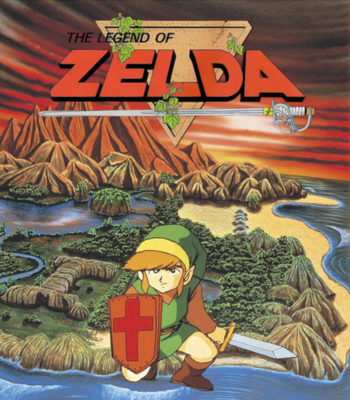 It's Dangerous to Describe The Legend of Zelda Here Alone! Take This.

The first game in The Legend of Zelda franchise, the original Legend of Zelda was a top-down Action-Adventure Hack and Slash, with a very nonlinear setup. Originally released in 1986 as Zelda no Densetsunote translation: "Legend of Zelda"; tagline: "The Hyrule Fantasy" for the Famicom Disk System's launch in Japan before being released in cartridge form for the Famicom's western counterpart, the Nintendo Entertainment System, in North America and Europe the following year. The NES release was notable for being the first game to use a battery-backed save feature, and was released, as a gimmick, in a gold cartridge rather than standard gray. This version was later released on a standard Famicom cartridge in 1994 as Zelda no Densetsu 1.

Both the original adventure and the "third quest" would eventually be remade as BS Zelda no Densetsu, an enhanced version for the Satellaview Super Famicom add-on with new dungeon layouts and voice acting. This version of the game is notable for being the first game to allow the player to play as Princess Zelda.

The story, as told through an Engrish title scroll (later revised in re-releases) is about the evil wizard Ganon, who has stolen the Triforce of Power and kidnapped Princess Zelda, holder of the Triforce of Wisdom. To keep it from falling into Ganon's hands, Zelda split her share of the Triforce into eight pieces and stashed them in dungeons across Hyrule. Link, the hero, must gather the pieces to enter Ganon's lair, recover the Triforce of Power, and Save the Princess. Unlike in later games, there is little dialog, other than vague hints given by various old men, and not much in the way of sidequests.

This has had some fan remixes over the years, including Zelda Classic, as well as some ROM hacks such as Zelda Challenge: Outlands

. There are also a number of randomizers for the game:

The game can be played on the Nintendo Switch as part of its Nintendo Entertainment System — Nintendo Switch Online suite of emulated classics. In addition, a special version of the game entitled The Legend of Zelda: Living the Life of Luxury! is also available. This special edition of the game attempts to enhance accessibility by giving access to nearly every single item at the start of the game in addition to a massive cache of Rupees.

The game would also get a re-release in November, 2021 as a special edition Game & Watch to commemorate the 35th anniversary of the game's original release.

According to Hyrule Historia, this is the second-to-last game in the "Hero Defeated" timeline; its immediate sequel is the last.

IT'S DANGEROUS TO GO ALONE! TAKE THESE EXAMPLES: