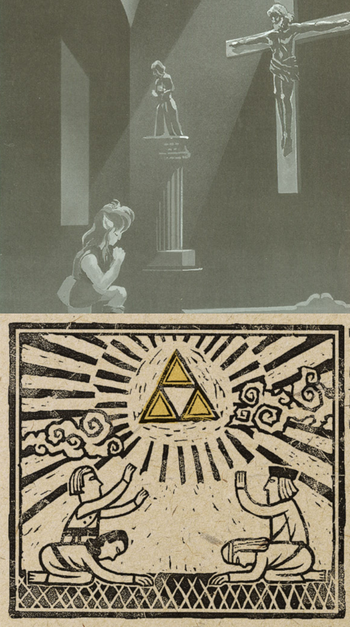 Above: Link praying to Jesus.(1991)
Below: People praying to Hyrule's Goddesses.(2002)
Advertisement:

A work or series that starts out with many more ties to the real world than it later has. This is especially jarring if it is set in another world or universe. As the series goes on, re-viewing/reading/playing the oldest installments becomes disconcerting (if the reader is more familiar with the more recent installments) as a result of similarities to the real world being more frequent. Usually happens as a result of the work's mythology not being fully defined, or a Schrödinger's Gun that left a few traces of the original plan.

Subtrope of Early Installment Weirdness and typically a result of Continuity Drift. Related to Art Evolution and Characterization Marches On. It may also be quite deliberate, as an aversion of Reed Richards Is Useless. Will sometimes invoke the Celebrity Paradox, which is when the popular culture of our world does not exist in the fictional world (because that world is itself part of our pop culture). Contrast Fictional Earth, when a world remains identified as Earth, but is otherwise very different. See also Doing In the Scientist, which is when a previously "realistic" work becomes fantasy-based.