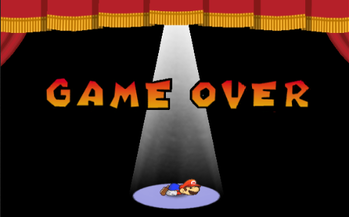 Oh, come on! He only tripped over a shoelace!
"Snake! What's going on?! Snake!? SNAAAAAAAKE!!!"
— Otacon, Metal Gear Solid
Advertisement:

Anytime the Player Character is killed in a video game, Critical Existence Failure is sure to manifest. Sometimes, the player character just flops dead like a rag-doll or jumps out of the screen. Other times, they explode (normally if they're a robot, but in chunky salsa if they're not), or the enemies start Beating A Dead Player. And if you're particularly unlucky, the game will show in full detail the many creatively grizzly ways your character can be reduced to a pile of flesh and/or bones, and then make fun of you for dying.

How this manifests itself varies, in some early video games, everything except the player would disappear and be replaced by a black void, removing all distractions from the character's corpse. In more modern games, all entities that are not the player (enemies, bosses, NPCs, etc.) would freeze in place as the player character dies. Dramatic Spotlight may be involved if the work is being showy. Due to the nature of this trope, it's very rare for The Many Deaths of You to apply, but if it does, expect all death scenes to have something in common, even if it's Yet Another Stupid Death.

The nice thing about this trope is that it avoids having to invoke Bloodless Carnage if a character should be reduced to paste, while simultaneously dodging having to give the player character a Family-Unfriendly Death. The death scene is always the same, but what would realistically happen to a character when they die like this is entirely left up to the player's imagination.

This isn't to be confused with It's a Wonderful Failure, as that is for dramatic failure in specific circumstances, while this encompasses dying in normal circumstances during game play. Contrast Have a Nice Death.