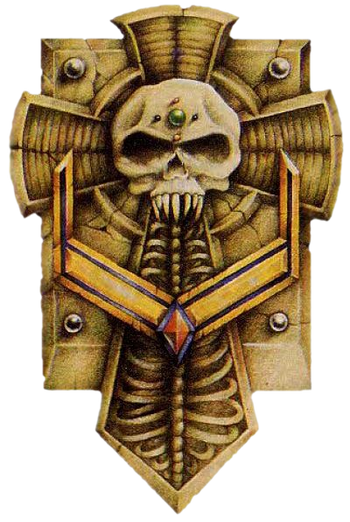 "And a cross from a faith that died before Jesus came..."
— Sarah MacLachlan
Advertisement:

Crosses are the iconic symbol of Christian religions, being used as a symbol of hope, healing and salvation. However, crosses have their dark symbolism too. After all, crosses were originally used as torture devices. They only became associated with religion because of Jesus Christ's crucifixion and subsequent resurrection.

Nowadays, crosses are commonly used as gravestones, causing them to turn into a representation of death or impending doom. The inverted Latin cross symbol, known as Cross of Saint Peter, was used as a Christian symbol to represent how the apostle Peter was crucified upside down. However, in recent years, the upside-down cross has begun to be used as a symbol of atheism and the occult. Several black metal bands use an inverted cross to call attention to their supposed devotion to Satan. Upside-down crosses also appear in horror movies as a signal of demonic activity.

Although crosses are popularly known to ward off evil, it's not rare to find villainous, antiheroic or undead characters such as vampires wearing crosses in fiction, likely as an irony or to highlight their closeness to death.

Due to gothic architecture being famous for cathedrals, crosses have also become popular images in the gothic fashion style, mainly silver gothic jewelry. A goth character can wear the cross to complement their fashion style. Not to be confused with the ankh