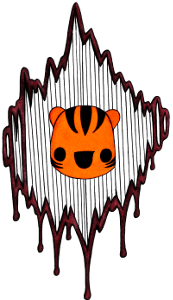 A man purchases a demonic hamster from a pet shop. Things quickly get out of hand.

The Sock series is made by Grey Gerling

, who is known for his unique hand drawn style of animation. There are 3 parts, the last of which was released in 3 separate episodes. The series is available on Newgrounds

There is also a prequel comic called Genesis of Sock

Although the video series stopped after the third episode, Grey Gerling wrote a timeline

that conclude the story of Sock and Gerling's other series in one go, tying all of his animation series in a single canon on the same time of finishing them.

The Sock series provides examples of: