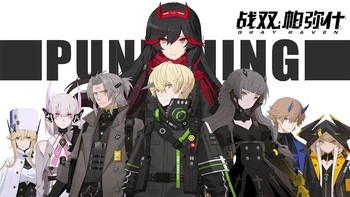 The abyss looks into you
when you look long into an abyssnote Top: Lucia, Bottom (L-R): Bianca, Liv, Watanabe, Kamui, Nanami, Lee, and Karenina
Punishing Virus Catasrophe—Originating in our most prestigious laboratories. In a few short years the virus wiped out thousands of years of human civilization, forcing us to seek refuge off-world... The courageous choices you make today will light a new flame, a glittering star in the darkness. May every child of humanity be able to return home safely.
—Hassen, Leader of Humanity, speaking at the start of the Reconquista Age
Advertisement:

In the distant future, mankind's first zero-point energy nuclear reactor gives birth to a new type of virus in its vacuum chambers, known as "the Punishing". When it escapes and spreads along the wind currents of Earth's atmosphere following an explosion, the cybernetic pathogen proceeds to kill humans and infect machines, causing them to mindlessly seek to destroy anything with a human consciousness. Humanity thus sees no other option but to escape into space, where survivors live aboard the space colony Babylonia. To reclaim their lost planet, humans devise a way to modify their bodies into virus-resistant combat cyborgs: the Reconstructed Soldiers, or in its short form, the constructs.

You are the commandant of a team of constructs: Gray Raven Squad. With them at your side, the counter-invasion of Earth will begin its next chapter.

At its core, Punishing is a high-speed action game in the vein of Devil May Cry or Bayonetta, with the wrinkle of a Match-Three Game: As players land hits with default attacks, a queue begins randomly filling with one of three different types of special moves. If two or three prompts get joined together, the attack becomes much more powerful, and opens access to each character's unique passives.

In October 2020, a Super-Deformed The Anime of the Game, Panini: Gray Raven aired on BiliBili.

Warning: Since the Global release of PGR is roughly two years behind the Chinese release in terms of playable characters and story content, there will be spoilers, marked and unmarked.