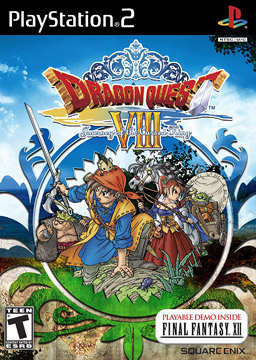 The eighth entry into the Dragon Quest series.

The only one spared is a young guard, and he dutifully follows orders to hunt down Dhoulmagus, return the scepter to its rightful place, and break the curse over everyone.

It's also notable in that it was the first Dragon Quest title to get at least some degree of moderate success in the West since the first game, for various reasons. Unlike its predecessors before it, Dragon Quest VIII did not suffer from Late Export for You, it was released a year after its original Japanese launch in 2004, the localization made several changes for the upcoming release to make it more palatable for a modern gaming audience (orchestral music, a UI update, voice acting), and perhaps the most significant factor: a demo of the highly-anticipated Final Fantasy XII was included alongside it in the initial run. It ultimately paid off in the end, as Dragon Quest VIII helped lay the groundwork for the series in the West and to this day is still recognized as one of the best RPGs to have come out of the 2000s.

In 2013, Dragon Quest VIII was released for smartphones in Japan. A North American release on iOS and Android followed in May 2014. It also received a remaster with new scenarios and the additions of the thief Red and Morrie the arena keeper as party members for the 3DS in August 2015 in Japan and 2017 in North America.

For tropes related to the Characters, go to the Dragon Quest VIII Character Sheet. New character trope examples should go there too.