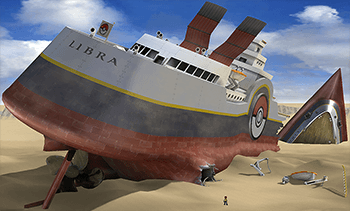 "The plan is perfect", she said. "It was off by just a tiny bit", she said. Look what just a tiny bit off did!
There's something tragic about a beached ship; not only is it "dead", but it's died on land rather than in the ocean and been denied a sailor's burial. You can imagine the surprise then, when our intrepid heroes run into a ship in the middle of the desert.
Advertisement:

Somehow this ship has been wrecked on land and far from water. If it isn't just there to look ominous and creepy like a Ribcage Ridge, then it will very likely hold important supplies, clues or shelter from the desert environment for the heroes.

The fact that the ship has run aground can mean a lot of things about the desert or setting. Mundane explanations include receding shorelines due to climate change or a typhoon/tropical storm/tornado. Weirder possibilities include but aren't limited to: a Teleporter Accident, The End of the World as We Know It having come and gone, the captain being that bad of a navigator, the place where all the stuff the Negative Space Wedgie sucks up gets dumped, or any of a hundred other possibilities. They may end up becoming Boats into Buildings.

While parts of the Sahara actually were once part of the Mediterranean Sea,

this was well before ships (or even humans) existed and thus a literal Saharan shipwreck is exceedingly unlikely.

A subtrope of Eerily Out-of-Place Object.