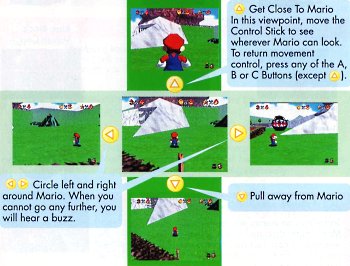 View it your way!
Advertisement:

The ability to rotate the camera independently around the player character in a third person 3D video game. The purpose is to allow the camera to face any direction the player chooses, no matter where the PC is facing. This flexibility has made it one of the most popular camera controls implemented to avoid Camera Screw (especially since it can just be mapped to the shoulder buttons or second analog stick).

It isn't perfect, though. It's not as fast as Camera Centering (why some games include both controls), and it's not always a good idea to rely too much on it, especially if the level design doesn't take these factors into account.

There are four main variations of rotating (depending on control availability or designer choices):

Which button turns what direction depends on the setup of the game. Sometimes turning along the X-axis means pressing right will the camera counterclockwise, and left clockwise. The opposite in a similar manner to turning with an FPS. Unfortunately, not all games state which rotation direction is "standard" and inverted". Tilting on the Y-axis is also standard and inverted, with the latter being like a flight stick. Some games let you choose between standard and inverted controls. Games that don't can often lead to Damn You, Muscle Memory!.

Also, which buttons are used will, of course, vary depending on the games and controller. The standards are the shoulder buttons or right analog stick for gamepads, and the mouse or Q and E keys for PC games.

Compare Orbital Shot (rotation used in movies), Always Over the Shoulder (the camera rotates with the player).