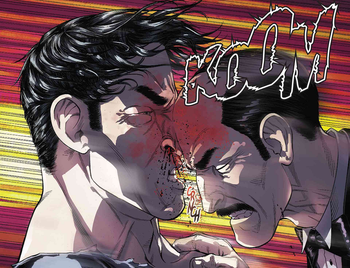 "Still, could be worse. My nose could be gushing blood!"
— The Penguin, Batman Returns
Advertisement:

When it comes to attacks on the human face, the nose is one of the biggest targets after the eyes and the mouth: after all, it's the first element of the face that's within reach. Though it doesn't have quite the same visceral response as attacking the eyes or the teeth, it's a very obvious vulnerability with its own special brand of pain and visual flair attached.

Hitting someone in the ear, for example, is painful but not quite as visually distinctive; in fiction, breaking someone's nose is not only noticeable thanks to the spectacular nosebleed, but it's often considered a sign that the attacker has done some serious damage. As anyone who's ever experienced this in real life knows, a broken nose is a big deal: the pain is immediate, the impact is disorienting, breathing may be impeded, the blood flow is often quite dramatic, and the nose itself may end up a different shape altogether if not properly treated. With this in mind, it's no surprise that bloody or broken noses are the most recognizable facial injury in fistfights, a visual shorthand for "you've just been hit hard."

When it comes to more serious injuries, there's a reason why characters with no noses appear unusual in live-action works: the nose plays a very important role in the human perception of the face, and without it, the entire face looks wrong... and that's not even getting into the horror of having the nose reduced to a gaping hole, for example. As such, going for the nose is one of the most common tactics in facial mutilation as a means of leaving the victim noticeably scarred for life.

Long story short, this trope deals with attacks on the nose of any kind. If they cause pain, they're here.

Depending on the severity of the attack, this can result in the character becoming The Noseless. In a written work, the character may subsequently talk in Congestion Speak.

Extreme cases may involve Facial Horror or Cold-Blooded Torture of some kind.

Compare Agony of the Feet, Ear Ache, Fingore, and Tongue Trauma for other injuries to specific body parts.

open/close all folders
Advertising
Anime & Manga
Comic Books
Fan Works
Films — Animation
Films — Live-Action
Literature
Live-Action TV
Mythology
In the Indian epos "Ramayana", the rakshasi Surpanakha flirts with Rama, and when he doesn't fall for Cute Monster Girl, threatens his wife. His brother Lakshman cuts off her nose. (It might have been an elaborate Thanosetos Gambit against Surpanakha's brother Ravana who of course wants to avenge her and is killed by Rama.)
Video Games
Web Comics
Web Original
Western Animation
Real Life
Feedback

Helen Brittas is a Bad Mother

Philippa Belmot quickly learns the hard way what happens if you call Helen a bad mother.

Helen Brittas is a Bad Mother

Philippa Belmot quickly learns the hard way what happens if you call Helen a bad mother.