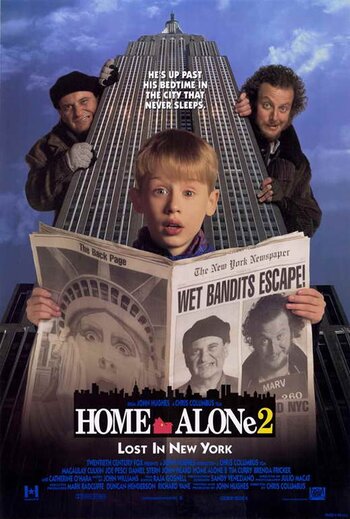 "It's Christmas Eve, and because of you, our child is lost in a huge city."
"You can mess with a lot of things, but you can't mess with kids on Christmas."
— Kevin McCallister
Advertisement:

Home Alone 2: Lost in New York is a 1992 American Christmas family comedy film. It's the sequel to Home Alone and the second installment in the Home Alone film series, directed by Chris Columbus and written and produced by John Hughes once again. John Williams returned for the soundtrack.

It's mainly a rehash of the original, only this time it's set in New York City, with Kevin McCallister (Macaulay Culkin) taking the wrong plane instead of being "forgotten" at home when his big family moves away from Chicago for the Christmas Holidays once again. The Wet Bandits, Harry (Joe Pesci) and Marv (Daniel Stern), have escaped from prison and travelled to the Big Apple with the intent of robbing toy stores during Christmas. Naturally, they cross path with Kevin again...

Followed by Home Alone 3, for which none of the actors and characters from the first two films returned.

open/close all folders
#-D
E-L
M-Z
Advertisement:
"Another Christmas in the trenches."