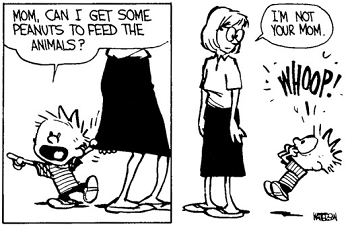 A subtrope of Mistaken Identity, this trope begins with Alice spotting Bob facing away from her. She approaches him. Either he turns around as she gets close, or she physically grabs him and spins him around...and surprise! It's not Bob, but some confused stranger who happens to look exactly like Bob, but only from Alice's angle. The audience usually sees the impostor from the same angle as Alice, so they are just as surprised as her when he spins around; in rare cases, the audience may instead see the impostor's face before Alice does, making it an instance of Dramatic Irony.

This flexible trope can be Played for Drama or Played for Laughs. In dramatic cases, the impostor can send Alice into a panic when she suddenly realizes Bob is nowhere to be found, or provide a cruel Hope Spot if Alice is searching for Bob already. In comedy, the humor may come from how completely different the impostor looks from Bob from the front; there could also be Cringe Comedy elements, if Alice says or does something embarrassing to the impostor (for instance, The Glomp) just before she realizes it's not Bob. The oblivious look-alike may also happen to wear Bob's exact Iconic Outfit by coincidence, if Bob has one, to make him a more convincing double.

Due to the often contrived nature of this trope, it can become prone to Trope Telegraphing. If a particular character Alice is looking for is only viewed from behind, and there's noticeable suspense as Alice approaches him/her, it's almost guaranteed to result in this trope, especially if said character is a plot-important one such as the Big Bad being (seemingly) encountered early on. The plot would end too quickly if Alice really did approach none other than Bob himself, and it needs to have drama, damnit!

Can overlap with Chair Reveal. Related to Identical Stranger. May also overlap with Mistaken for Object of Affection. Compare Face-Revealing Turn, which includes the spin but not the mistaken identity portion, and aims specifically at horror. May include a Butter Face character.