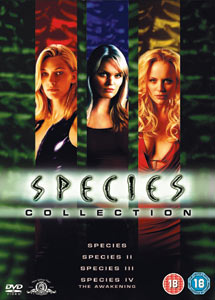 Remind us again why this is bad.
Advertisement:

For thirty years, SETI has been scanning outer space, looking for signs of alien intelligence. In 1974, scientists sent out a message containing human DNA and the location of our planet. In return, they received two messages: one contains a catalyst for methane that allows the creation of cheap and efficient fuel, and the other contains a sample of alien DNA and instructions for how to combine it with human DNA. It is not long at all before scientists follow the instructions, creating the female human/alien hybrid Sil. She matures quickly, resembling an 11-year-old-girl after only a few weeks. She is intelligent, strong and agile - but the head of the research team thinks she might be dangerous to humanity and tries to terminate the experiment. Big mistake. Sil breaks out of her little habitat and escapes into Los Angeles, where she matures fully with two things in mind: survival at any cost, and reproduction with a human male.

It was followed by three sequels: Species II (1998), the only one theatrically released, bringing back Henstridge, Madsen and Helgenberger; Species III (2004), released direct-to-DVD and featuring a cameo by Henstridge; and Species - The Awakening (2007), which actually debuted on the Sci-Fi Channel one month before its home video release.