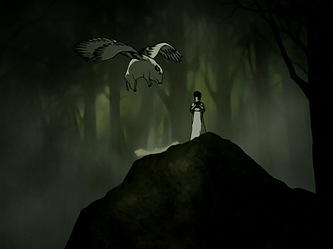 Aang sees a hallucination of a young girl he doesn't recognize.
"Time is an illusion and so is death."
Advertisement:

While flying, Aang and friends are attracted to a mysterious swamp and get separated from one another. They begin to see unique illusions in the swamp: Sokka sees Princess Yue, Katara sees her dead mother and Aang sees a mysterious girl. They are reunited and attacked by a swamp monster who turns out to be a wise man from a tribe of swamp waterbenders. He explains that all beings are connected, as the swamp is a single large tree, and the visions are of people they have met or will meet. Meanwhile Zuko, disgusted with having to live as a beggar, dons the mask of the Blue Spirit once again.