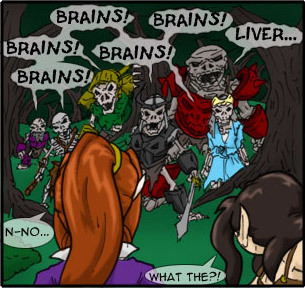 "A census taker once tried to test me. I ate his liver, with some fava beans and a nice chianti."
— Dr. Hannibal Lecter, The Silence of the Lambs
Advertisement:

Humans, like most living things, are composed of many different organs and tissue types. Some people-eating monsters out there will not find all of those parts appetizing enough to eat.

A monster can be made more horrifying if instead of simply eating people, it eats only certain parts of people. The vampire is the best known example of this type of monster with its interest in blood, but, for every organ or tissue type composing the human body, there will be some critter that finds it a delicacy. This makes some amount of sense, since humans themselves often favour certain parts of their livestock as food, instead of just eating the whole hog.

The horror quotient can really be ramped up if the part the monster is interested in can be extracted without immediately killing the victim. The victim can then suffer a slow, screaming death in front of their companions and the audience as the monster painfully extracts its chosen food. Also a partially consumed corpse can be stumbled over announcing to the audience and the characters that something is rotten in Denmark. If someone is telling a Ghost Story about one of these brutes, they'll often make it a Scarily Specific Story and have them target people in a group the listener belongs to.

I'm a Humanitarian is the supertrope if feeder and victim are both human. If they're not, then see To Serve Man for human-eaters, or Monstrous Cannibalism for non-humans eating fellow non-humans. Brain Food is a subtrope, as is vampirism (blood drinking) in most cases. Those who are unfit for eating are usually Too Spicy for Yog-Sothoth. Only distantly related to Picky Eater, which is rejecting normal foods. This can overlap with Fantastic Diet Requirement if the monster is driven by biological or magical needs instead of simple dietary preferences.