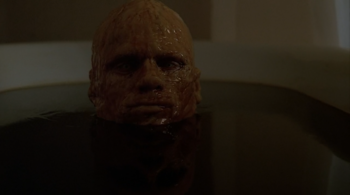 "The fluid that I found in Betts' bathtub was povidone iodine. It’s often used by lab researchers on reptiles and amphibians to aid regeneration."
Written by Vince Gilligan, John Shiban & Frank Spotnitz
Directed by Kim Manners
Mulder: Scully, there’s a great possibility that Leonard Betts not only is cancer...
Scully: But that he needs it for survival?
Advertisement:

Mulder and Scully investigate after a man (Paul McCrane) revives at the morgue after an accident — in which he was completely decapitated.

Scully: [Betts]' dead?
Mulder: As near as anyone can tell.