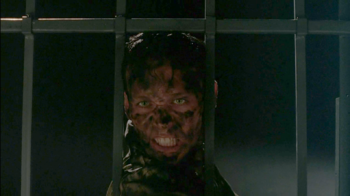 "Think of him as an animal. He'll only kill out of necessity or self-defense."
Written by Glen Morgan & James Wong
Directed by David Nutter
"If you release Eugene Tooms, he will kill again. It's in his genetic make-up."
— Fox Mulder
Advertisement:

Eugene Victor Tooms (the Monster of the Week of the episode "Squeeze") is back. He's about to be released from the psychiatric hospital, and when Mulder and Scully find out, they set out to stop him and expose him before he takes his final victim needed for his re-hibernation. However, they're both under intense scrutiny due to their unorthodox handling of cases, and so Scully wants to make sure that they handle this investigation strictly by the book.

"It's amazing how things change, isn't it?"