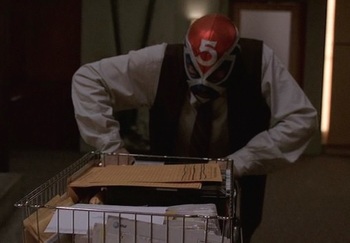 On the Mexican Day of the Dead, Angel has a run-in with a masked Wolfram & Hart employee who's connected to an Aztec warrior demon named Tezcatcatl, who preys on the hearts of heroes. This leads Angel to wrestle with some personal issues when he learns about "Los Hermanos Numeros", a family of five Mexican wrestlers who helped the helpless until one day they were slain by Tezcatcatl, except for the fifth brother. Angel helps the last member, "Number Five", discover the hero inside, which he lost when his family was killed.

Meanwhile, Spike researches the Shanshu Prophecy and thinks that he, not Angel, may be the vampire who will become human.