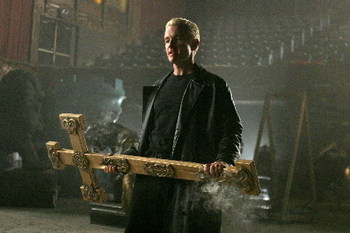 In 1880 London, recently-sired William (not yet Spike) meets Angelus for the first time. Angelus accepts William into the group, saying he looks forward to killing with another man. In the present, Spike demands his own office (or Wesley's office during his leave of absence, while he adjusts to the shock of killing what he believed to be his father). Spike lacks sympathy for Wesley, since he himself killed his mother while she was hitting on him.

Harmony opens a package for Spike from an unknown source, producing a flash of light. When Harmony goes to answer the phone, she's greeted by electronic screeching. As phones start ringing off the hook, Spike heads for Angel's office, but when he tries to walk through the door, he quickly finds he is corporeal again, and immediately makes the most of his new body by taking away Harmony for sex.

Fred arrives, complaining that all of the atmospheric gauges in the science department have gone haywire and blown out the instruments. She is surprised to hear that Harmony and a re-corporealized Spike are, as Gunn says, "having a nooner". Eve arrives and announces that the whole universe is in turmoil — Spike's existence is messing with the expected course of the Shanshu Prophecy, because after dying on the Hellmouth to save the world, Spike now qualifies as a champion. Although this hadn't been a problem before when Spike was a ghost, now he's flesh again the universe can't cope. Meanwhile, Harmony's eyes start bleeding and she bites Spike, screaming that he's using her and really wants his "Slayer whore". He returns to the group, and Eve says because there are two possible candidates for the Shanshu, "the wheel of destiny starts to spin off its axis."

Gunn returns with news that the White Room is gone, replaced with a howling abyss. Eve thinks the solution is in the Shanshu Prophecy, but Angel says he just read it and it wasn't helpful. Spike is surprised he has been reading the prophecy which he claims not to believe in. They decide someone from Wesley's department needs to look over the prophecy, and meet with Sirk, who tells them that they read a translation and therefore didn't get everything out of it. He re-translates: "The balance will falter until the vampire with a soul drinks from the Cup of Perpetual Torment". Sirk says that whoever drinks from the cup is the one who was destined to, and once the champion is decided the universe will go back to normal. Sirk says the cup is in a destroyed opera house in Death Valley, Nevada.

Back in 1880, Angelus and William celebrate a wedding massacre, until William leaves to be with Drusilla, whom William calls his destiny. Shortly after, William discovers Angelus having sex with Drusilla; the two laugh at William and Angelus taunts him with his earlier words. At the opera house, Spike and Angel battle it out for the cup with Spike saying that Angel has already chosen the side of evil by working at Wolfram & Hart. In the science lab, Gunn begins bleeding from the eyes, warning Fred not to trust Eve. He starts choking Eve, demanding to know who she really is. Fred tends to Eve, who starts crying and says that she knows what all the group think of her, but she's "not the bad guy." Back in 1880, William fights Angelus for sleeping with Drusilla. Angelus tells him that no one belongs to anyone, and William should take Drusilla if he wants her; William chooses to keep fighting.

As Angel struggles in their fight, Spike tells him he knows why Angel can't stand the sight of him; because every time he looks at him he sees the monster he created. As he repeatedly punches Angel in the face, Spike reminds him that every life he took and every terrible thing he did was because of him, and while Drusilla made him a vampire he always considered Angelus to be the one who made him a monster. At this point, Spike hits Angel with a cross despite it burning his hands. As he lands, Angel retorts that he didn't make the monster but just let him out. Spike isn't done, however, and believes Angelus tried to make Spike into another creature as terrible as him in the world, so that he could feel better about himself. Also, unlike Angel who had his soul forced upon him, Spike fought demon trials so that he could be rewarded with one so that he could be a better man. Angel retorts that Spike only did it to try and have sex with Buffy who never really loved him. Spike, furious, reveals to him that while Angel only had sex with Buffy once he did it plenty of times.

Provoked into a jealous rage by Spike's words, Angel quickly gains the upperhand, fighting more fiercely than before. Both furious, the fight continues more aggressively. However, for the first time in 100 years, Spike comes out the victor. He contemplates killing Angel, but stakes his shoulder instead, stating that he would dust him, but he also doesn't want her (Buffy) to "bitch" about it. Spike grabs the cup and Angel tells him that it's not a prize — it's a burden: "Do you even really want it? Or is it that you just want to take something away from me?" "Bit of both," Spike replies, drinking from the cup. His expression changes . . . as he realizes the cup is filled with Mountain Dew. Angel returns to Wolfram & Hart with the news that the cup was a set-up; Sirk has disappeared. Gunn and Harmony regain consciousness.

Back in Angel's office, Eve tells everyone that the Senior Partners temporarily fixed things. She says that they don't know anything about Sirk's trick and are as angry as Angel is. He is soon seen brooding over something, and Angel confesses that even though the cup was fake, Spike beat him for the first time ever and was the one that managed to drink from it. As a result, Angel is starting to believe that this is proof that Spike is the vampire for the Shanshu Prophecy as not only was he stronger, but he "wanted it more".

Elsewhere in L.A., Eve enters an apartment and undresses, gloating to someone that Angel and Spike fell for the cup story and Sirk disappeared without the Senior Partners knowing anything. In addition, the gang are wondering if they can trust the Senior Partners. She crawls into bed with a tattooed Lindsey. "Well... it's a start," he replies.