This Explains So Much 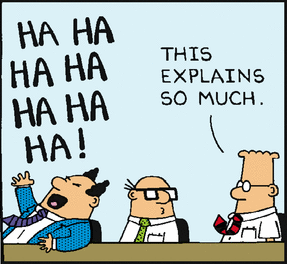 The joke he's laughing at is too stupid to print... that's the joke.

A Stock Phrase usually uttered in comedies. Basically, someone has learned something strange about another character, but rather than being surprised or shocked, they take it in stride. Why? Because it actually explains a great deal of the odd characteristics of the character in question.